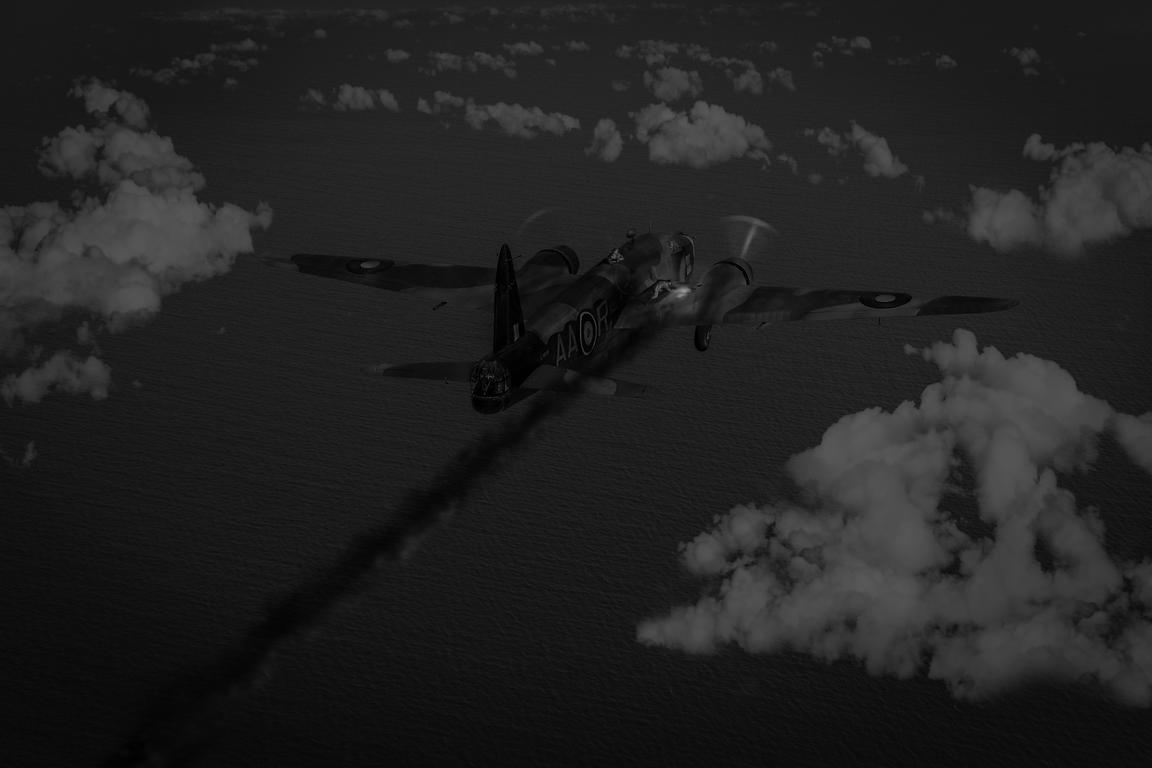 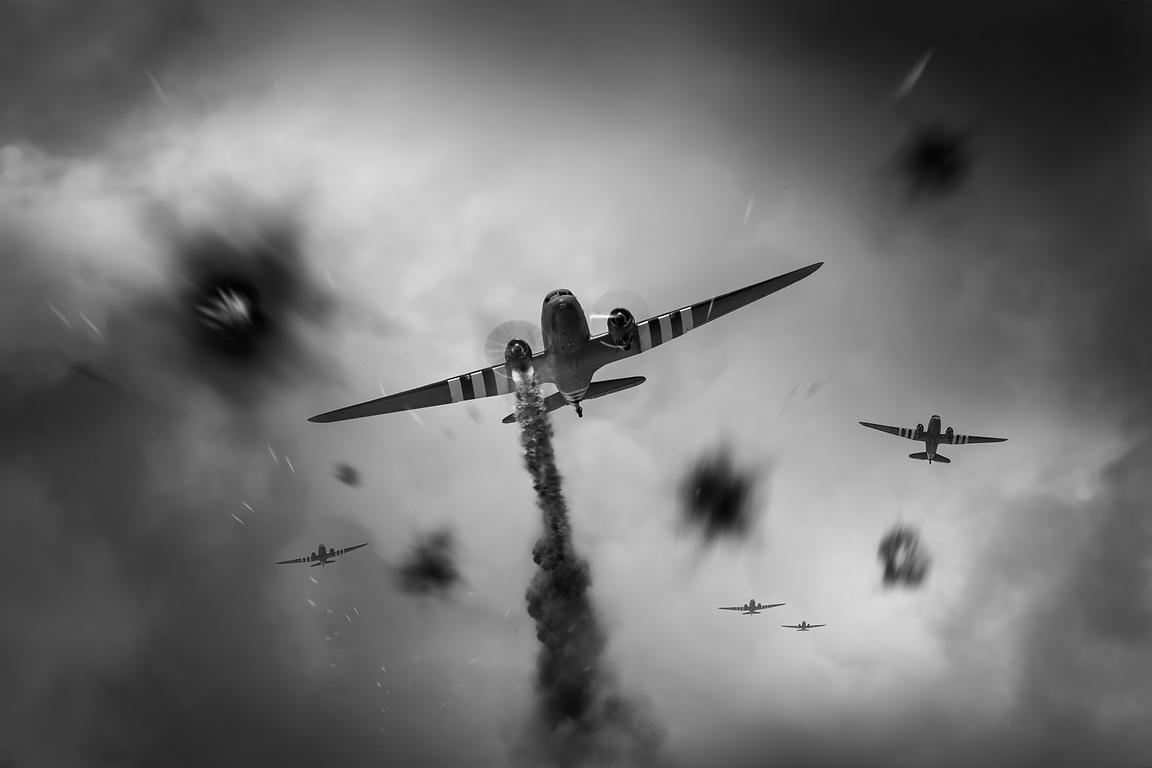 This depicts the action over Arnhem as No 271 Squadron, RAF Transport Command, was attempting to resupply British paratroops pinned down at "a bridge too far". The pilot of Douglas C-47 Dakota KG374, YS-DM, David Lord, was later awarded a posthumous Victoria Cross, for his "most conspicuous bravery". The citation read:

"Flight Lieutenant Lord was pilot and captain of a Dakota aircraft detailed to drop supplies at Arnhem on the afternoon of the 19th September, 1944. Our airborne troops had been surrounded and were being pressed into a small area defended by a large number of anti-aircraft guns. Air crews were warned that intense opposition would be met over the dropping zone. To ensure accuracy they were ordered to fly at 900 feet when dropping their containers.

"While flying at 1,500 feet near Arnhem the starboard wing of Flight Lieutenant Lord's aircraft was twice hit by anti-aircraft fire. The starboard engine was set on fire. He would have been justified in leaving the main stream of supply aircraft and continuing at the same height or even abandoning his aircraft. But on learning that his crew were uninjured and that the dropping zone would be reached in three minutes he said he would complete his mission, as the troops were in dire need of supplies.

"By now the starboard engine was burning furiously. Flight Lieutenant Lord came down to 900 feet, where he was singled out for the concentrated fire of all the anti-aircraft guns. On reaching the dropping zone he kept the aircraft on a straight, and level course while supplies were dropped. At the end of the run, he was told that two containers remained.

"Although he must have known that the collapse of the starboard wing could not be long delayed, Flight Lieutenant Lord circled, rejoined the stream of aircraft and made a second run to drop the remaining supplies. These manoeuvres took eight minutes in all, the aircraft being continuously under heavy anti-aircraft fire.

"His task completed, Flight Lieutenant Lord ordered his crew to abandon the Dakota, making no attempt himself to leave the aircraft, which was down to 500 feet. A few seconds later, the starboard wing collapsed and the aircraft fell in flames. There was only one survivor, who was flung out while assisting other members of the crew to put on their parachutes. 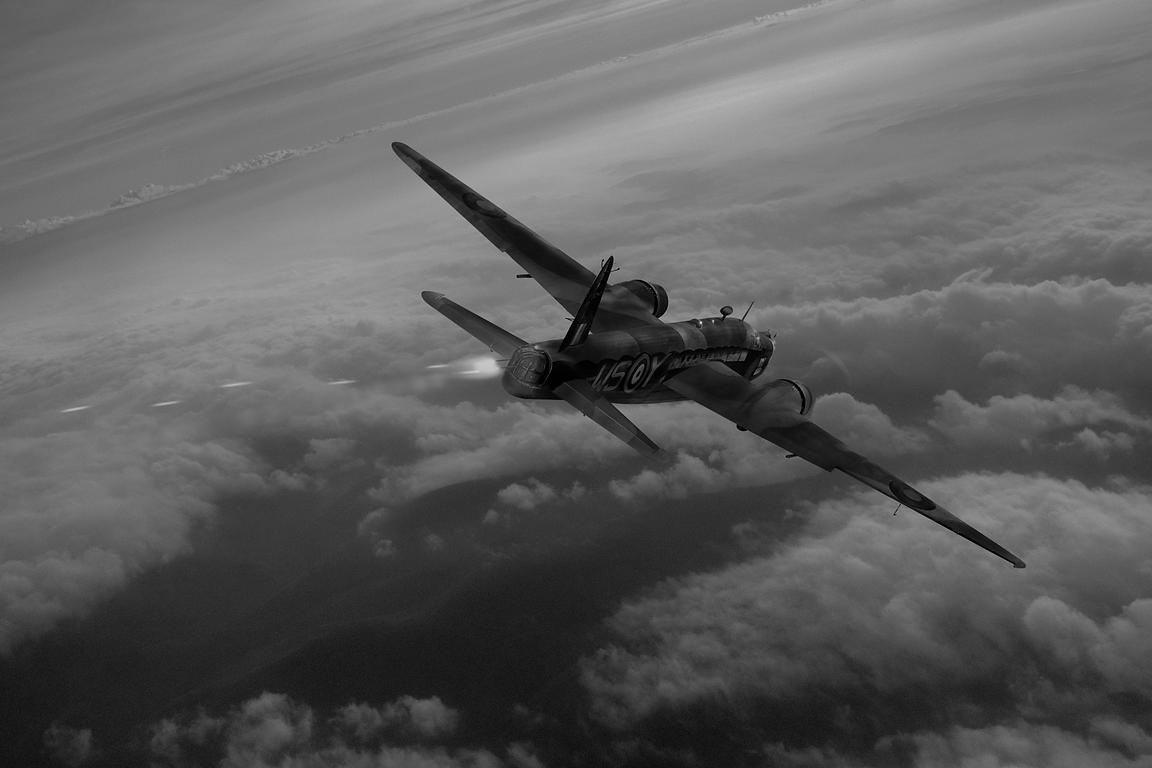